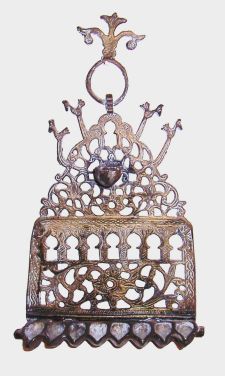 The festival of Chanukah, known as the festival of lights, has its roots in history. As part of the Hellenistic Syrian kingdom during the reign of Antiochus IV Epiphanes (c. 215-164 BCE) the inhabitants of Palestine were subjected to a campaign designed to obliterate Judaism by Hellenising their country, culturally and religiously. The Maccabean war, a response to the repressive edicts denying religious freedom, resulted in a series of victories by the Jewish people under the leadership of Judah Maccabee and the beginning of the Hasmonean dynasty that lasted until the Romans conquered the land of Israel in 63 BCE.

The reoccupation of Jerusalem in 164 BCE and the rededication of the Temple, having been defiled by idolatrous sacrifices, included the rekindling of the Temples holy flame. Only a small vial of consecrated olive oil, enough to last a single day was recovered. Miraculously, the flames burned for eight days and nights, the amount of time needed to prepare sufficient oil to keep alight the seven-branch candelabra (menorah).1

The eight days of celebration that became an established religious festival was instituted by Judah Maccabee on 25 Kislev 3597, in the Jewish calendar, year 148 of the Seleucid era, 2 164 BCE in the Gregorian calendar. The events recorded in I Maccabees, covering 175-135 BCE, the first and most historically reliable of the four volumes covering the Maccabees, supports the argument that the festival was celebrated annually from this time.3

Further mention is found in Josephus and references to kindling lights in religious laws set out by sages in the second half of first century CE.
The kindling ritual lights involved lighting one oiled cotton or wool wick on the first night, two the second, and so forth, until, by the end of the holiday, there were eight lights aglow. These early menorahs were likely simple stone or moulded clay lamps commonly found around the Mediterranean during the Greco-Roman and Byzantine periods.4

People probably kindled either eight individual ones set in a row or larger lamps that were edged with eight separate oil compartments. Some of these lamps, it is said, bore covers depicting the menorah, the seven branched candelabrum that had once graced the Holy Temple in Jerusalem. 5

The Chanukah lamp is designed according to strict rabbinic rulings. The lamp is edged with rows of eight oil fonts at a uniform height. Moreover, since these lights are sacred, they may not be used to illuminate and so an extra light, a shammash (servant) is used to kindle the Chanukah lights. This ninth font is positioned separate to the others. Olive oil, which burns clean and strong, was not only the common fuel then, but the preferable one. Then as now, many considered it closest to tradition, closest to the Chanukah miracle.

With the fall of the Hasmonean dynasty and the occupation of Palestine by the Romans, the Jews once again revolted. In 67 BCE Roman forces led by Vespasian and his son Titus resulted in the country becoming a province of Rome. Jerusalem and the Temple were destroyed. The centre of Jewish learning shifted to Jabneh but subsequent unrest resulted in the near annihilation of the Jews from Judaea. Those that survived were from mainly from Galilee.

The Romanisation of Palestine triggered the dispersion of the surviving Jews. Some joined existing communities in the north African region  west of the Red Sea, others settled in German-speaking countries, culturally identified as Ashkenazim. The migratory process continued for centuries with refugees choosing to make the Iberian Peninsula home; collectively labelled Sephardim, a term adopted from the Hebrew word for Spain.

Regardless of destination the Jews continued their religious observances. Evidence suggests that Spanish Chanukah lamps, through the twelfth century, resembled early designs. Over the next hundred years, however, as hand-wrought lamps gave way to cast bronze or brass ones, their form changed radically. Now eight oil fonts were set along strips or blocks of metal, which were attached to decorative, vertical metal back plates. These are sometimes called bench lamps.

The 1391 massacres and the 1492 Inquisition was the impetus for thousands of Spanish Jews to seek sanctuary in the relative safety of Morocco. Bringing with them their chanukias (Chanukah lamps) the forms were subsequently introduced to other Jewish settlements in Tunisia and Algeria with the migration of Moroccan Jews to these North African cities.6

Many North African bench lamps also feature sturdy trefoil or palmette-shaped finials at their necks, which allow them to be hung on walls. These wall hung lamps, predominant in the region, probably evolved in response to the rabbinic ruling that Chanukah lights must be displayed outside ones dwelling, to be seen by all. 7

By the 1500s, metalwork had become a North African Jewish specialty. This was in all likelihood due to Koranic injunctions against hoarding and lending silver and gold.8 Moreover, Jewish artisans, either following the Biblical injunction to make no graven images or in deference their Islamic hosts, did not portray human figures. Nor did they portray animals, except for stylised fish or birds, which in Islamic culture, symbolise fertility, and in Judaism, figure in astrological signs in ancient synagogue mosaics.9

The artisans rarely left their creations unadorned, drawing on a variety of decorative metalworking techniques such as piercing, punching, enamelling, engraving, tracing, applique, as well as repousse work.

Craftsmen gleaned inspiration from their surroundings and many North African Chanukah lamps are adorned with Islamic architectural elements. These include horseshoe-shaped arches, scroll-like ornamentation, and galleries of Moorish-style windows, reminiscent of mihrabs, decorative niches in the walls of mosques. Many lamps feature flowing arabesques, repeating openwork floral or geometric motifs that, when used in mosques, symbolise infinity.

Three different types of North African Chanukah lamps have been identified. The first, from Tetouan, a port city in northern Morocco, is typically fashioned from intricately pierced and engraved copper sheets.  It is decorated with applied, spiralled cast architectural columns,  and  features a row of characteristic Italianate round bowls with elongated spouts, designed both to hold wicks and catch any excess drops of costly oil.

The second type, found in inland Morocco, is characterised by vertical back plates richly-appointed with raised, pierced, stamped, or engraved arabesques. Although North African lamps are rarely fashioned from silver, an example from Meknes (or possibly, Essaouira), Morocco (see illustration F5606), dated to the early twentieth century, features pierced metal floral openwork mounted on a silver back plate. It is framed by a cyma reversa, a flowing, doubly curved arch that resembles the letter s. This decorative form, found in both Persian and Greek ancient architecture, is accented with wrigglework, a zigzag pattern of engraved lines and is found on other Jewish Moroccan ceremonial objects. An ornate silver pick, evidently to aid in positioning the wicks, is attached by a heavy chain.

The back plates of Chanukah lamps from the coastal cities of the Maghreb, Morocco, Tunisia, and Algeria, both cast and hand worked, are generally wider than tall. Many feature flat, unornamented, open scrollwork designs and round bowls with long spouts, like those found in Italy. This is not surprising since during the Spanish Inquisition, Jews found haven there. Seeking refuge from persecution, in the seventeenth and eighteenth centuries, Jews from Livorno, Italy also settled along the North African coast. The intermingling of decorative forms makes it difficult to identify regional influences.

Dating North African Chanukah lamps is problematic. Maghrebi Jews ascribed value according to appearance rather than age and history. When lamps became dull, worn, or in need of repair, local artisans melted them down, casting them anew in beloved, traditional shapes. Because these pieces were newly produced, generation after generation, genuine antique lamps are rare.