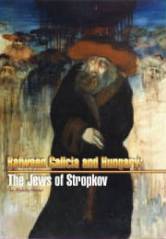 “Melody Amsel, an American-born Israeli amateur genealogist, has created a beautifully written yizkor(Holocaust memorial) book about the Jews of Stropkov, Slovak Republic. Many Jewish genealogists have memorialized members of their family murdered in the Holocaust. Ms. Amsel went a step further and not only memorialized the Amsels of Stropkov, but all the Jews of Stropkov. The book has some unusual features for a yizkor book. It is written in two languages: Hebrew and English, each a mirror of the other. It does not have a necrology–a list of those who were killed. Instead, it lists all the Jews of Stropkov (and neighboring communities), identifying the survivors in bold face. The list goes on for 64 pages of Holocaust victims, occasionally interrupted by an entry in bold face to identify a survivor. Of the more than 2,000 Stropkovers identified, only 162 survived the Holocaust.

The narrative is a history of the Jews of Stropkov, from their first presence about 1640 to 1945. Particular emphasis is on life just before the Holocaust and the events during the Holocaust. Amsel personalizes the times by not merely describing life during these periods but by naming Jewish citizens of the town. Clearly she interviewed many of the survivors and described activity as it happened to specific people.

A middle section has more than 100 pictures of the Jews of Stropkov. Heavy emphasis is on life before the Holocaust and even pictures taken during the deportations by a Christian photographer…  learn more